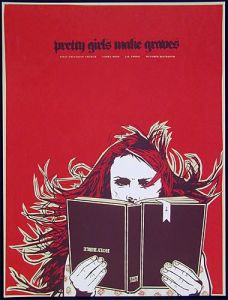 I’ve embedded Nick in the picture above.

♞ Two wolves worth of blood, fresh and vibrant, ran down her now almost black cloak rendering it red once more. Electricity coursed through her like a torrent from a broken dam bank during a storm; until that point she was unaware of just how truly tired she had become. Worse, Gentle Annis was starting to question the effect of fresh blood upon her riding hood, the immense and addictive power it gave her. Again her senses heightened beyond known measure; again her muscles rippled beneath her skin like snakes writhing in a barrel of butter; again her nostrils flared, sucking in huge amounts of air, her pulse thumping strong and regular, a mimic of clockwork at its best.

☛ Coaxing the kind old and thoroughly over sized Grandpa Wolf outside to the wood heap after dinner had been child’s play for her. The first blow Gentle Annis landed on him was whilst he was bent forward picking up a piece of newly split pine, his head almost touching the ground in the process. Gentle Annis, with the force of an extremely angry Norse god, struck at the wire haired base of skull with the sharp worn side of the axe head, causing Grandpa to pitch forward, landing hard on his lengthy snout; falling as quietly as snow silent on the ground.  Gentle Annis’s second movement was with the a long, fine and well honed filleting knife she had secreted about her body, sneaking it outside within the folds of her riding coat. Slowly and carefully sliding it between vertebrae and skull to the hilt into the elderly, kind and hospitable wolfs brain; his body freezing in rictus as she did so. Not a drop of blood was spilt in her efforts.

☛ Quiet as a mouse, Gentle Annis re-entered the cottage that was home not house to generations of wolves, placing an armful of wood into the wood box on her return. The sounds of Grannies impressive window shaking snores washing all other sound within the little cottage away.

Removing her boots and then withdrawing the filleting knife from her belt, Gentle Annis stalked into the warm and comfortable bedroom on stockinged feet. Moving around and to the left of the bed, Gentle Annis blew a blonde tendril of hair out of her face, and began slowly and carefully, drawing the doona and top sheet back from Grannies slumbering form. A gentle, non-offensive, scent of old lady crept into her nose giving Gentle Annis a sense of warmth and homely comfort.

With the wooden handle grasped firmly in both of Gentle Annis’s dainty hands, she placed the sharp tip against the space created beneath the sixth rib to the left of Grannies sternum. In a sudden move of absolute power, Gentle Annis thrust the knife with every ounce of power she could muster directly through Grannies heart.

Whilst red riding hood had been on target, the sheer force she had used came as a surprise to even to Gentle Annis herself; the realisation in the result as she withdrew her blood and gore smeared hand, now buried beneath the wrist, from within Grannies chest. Further shock came when she found the first third of the knife blade embedded in a heavy oak slat of the bed, beneath the lovely old wolf, pinning Granny and mattress to the matiral bed. So fast and with such force did Gentle Annis deliver her death blow, Granny did not even blink, nothing but an elongated sigh escaping the friendly mother and grandmother.

☛ Working with what knives she could find, plus a heavily worn flat and circular stone to keep all sharp, Gentle Annis set out first in coating her cloak with the wolves fresh blood, its effect hitting her with a now heavily addictive narcotic effect. Her second task, taking almost two hours to complete, was to skin the old married couple; their dead gentle and loving eyes watching every stroke she made from beyond the veil, removing their skin with the skill of an artist.

“Ooooo I love my cloak” she crooned, bloody to the elbow.

Job complete, Gentle Annis dragged the bloody and abused couple into the maternal bed, the only bed they had ever owned, from nuptial’s unto death. Skipping happily in the manner of little girls the world over, Gentle Annis roughly dragged coals from the fire with the small shovel sitting beside it, and walked holding the spade with coals glowing red through the front door. Turning and placing her riding hood gently on the ground beside her, Gentle Annis climbed up the rough stone wall of the happy home, shoving the coals as deeply into the thatch as her arm could stretch, and blew on them. The initial happy golden glow quickly grew into an excited little fire before she got the the ground. Dragging her cloak around her shoulders, Gentle Annis stepped back from the fire as the old dry thatch exploded, manic ash and flame filling the air. After a minute, the roof collapsed in on itself, and consumed all beneath with a heat strong enough to melt horse shoe’s and wipe out the remains of a kind and loving elderly couple.

Still laughing, Gentle Annis rolled up the two skins, tying them with twine, and slung them both over her left shoulder. Turning on her heel, Gentle Annis skipped off into the pink first light of the day, away from the remains of the cottage and the sunrise, into the lessening tree filled darkness before her.