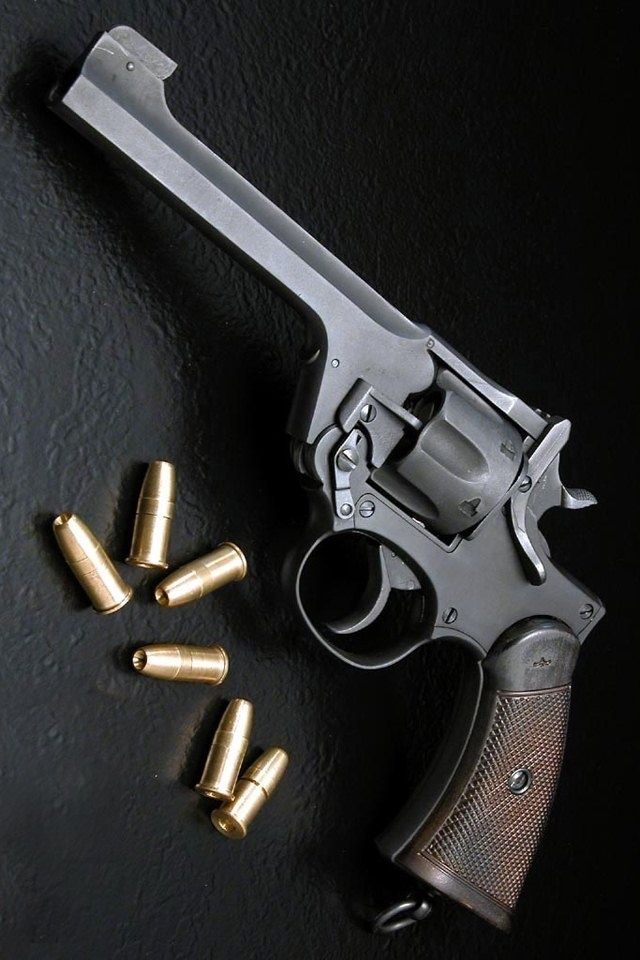 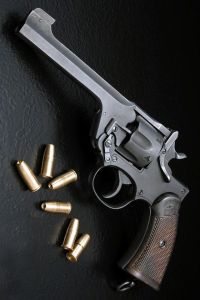 Right, I wrote this in about half an hour by hand, and committed it immediately to type.  This is the first part of ‘Bella Moncrief’, now ‘Tilly Moncrief’, (name association the cause for the retitling) going to war on Cat Lucifer. Her intention at this stage is to neither cause death, prove a point, nor offer a warning. Think straight razor and .455 Webley Mk VI (a revolver, pictured above) used for fact-finding.

You know the story regards first drafts, click the picture above for story related tunes.

South Perth and the Windsor Hotel flash by on Tilly Moncrief’s right, she hated any hot dish served cold.

Gearing down, the surrounding 3am darkness enveloped her like a black velvet glove as she rode quietly up Mill Point road. Letting the bike get near to the top of the hill she turned it to face back the way she had just come. Killing the front light and the engine, Tilly coasted back down it in near silence, the moon waxing gibbous above on the clear winter night, the scent of dust and mud penetrated her scarf covered nose. Pulling off the gravel road to the left,  she lined up and put the bike behind shrubs screening the back of the hotel come brothel from the casual passer-by.

Sporting a slightly too large sheepskin aviator jacket freshly acquired without payment from the cloak room at the Aviators Club, a pair of moleskin Jodhpurs, cavalry gaiters, hob nailed boots, a black beret, and a cocaine derived smile; Moncrief stopped briefly to relish the electricity of the drug heightening her senses and mood. Ecstasy filled her as adrenaline coursed through her delicate frame resulting in delight so refined as to kiss the sky whilst standing on top of the world. Kicking the stand out on her new and creatively acquired BSA, Tilly leaned the bike across until the stand took bikes full weight, only to throw her right leg behind her across the tail of the two-wheeled juggernaut, leaving her standing; alone, silent and deadly.

Grinning wickedly, Tilly crouched and moved with the stealth of mercury through the dense Grevillea screening the rear of Lucifer’s Brothel aka – The Windsor Hotel. A breeze coursed high through the tree tops of the white gums and domestic palms, sussurating in whispers for all to hear. A far away dog barked at a cat in the night, Tilly stepped forward. First three steps, and a further five, out of the screen she had served within moments before. Looking left, and then to the right, the sensation of exposure fleetingly distracted her, focus instantly returning upon the sight of a saddled horse tethered to a low branch not twenty yards away, four recent model Police cars haphazardly parked beyond it.  There are at least four coppers taking advantage of Lucifer’s girls inside.  She had expected more.

Removing the .455 Webley with her neatly manicured right hand from beneath the armpit of her left, Tilly drew it single-handed before her, arm stretched at 90 degrees  from her chest, elbow slightly bent; her mouth relaxed and loosely open, knee’s vaguely bent, the revolver a veritable canon in her grip. Her right hand took charge, removing itself from the clutches of her brain, taking on a life of its own, wondering why it hand not done so earlier. Succumbing to its wiles, the Webley roared and crashed in the night, six well-aimed hollow point bullets shattered the silence and the decrepit door, Cat Lucifer’s unofficial entry to her carnal hell within. Why there was no sign upon it stating ‘here be monsters’ perplexed Tilly for a fraction of a second.

Without wasting another instant to inaction, Tilly sprinted 100 odd yards over mud, dust and gravel, around the den of despairs northern aspect. Reloading as she ran, and sliding to a well executed holt at the street corner edge of the gabled veranda. The hotels front door no more than four yards in front of her, all but invisible in the darkness, the Webley relinquished a pair of silence shattering mercury tipped rounds. The effect surprising even herself at the carnage they wrought, and the size of the splintered holes that remained.

Ears ringing Moncrief ran again, following the southern street front of Lucifer’s two storey domain, once more turning left and sprinting to the place she had originally started from some 90 seconds earlier, loosing the remaining four hellish bullets from the revolvers chambers into the door frame of the kitchen door she had originally assailed, tearing it from the wall, casting it asunder.

Once more she ran, lights and shouts and the sound of people running from within surprised the night. Knowing the sound of the BSA’s engine starting would bring unwanted pursuit, the direction she took was to the now shying and pulling midnight black horse of average proportions. Straight razor in hand, Tilly slashed the reins in two deft blows, releasing the startled mare, leaving it galloping headlong through the Grevillea that had so recently been Tilly’s screen, narrowly missing the BSA as it did. Lights now on in all of the upstairs rooms, pistol fire chasing the horse into the night, the sound of dogs barking furiously as it passed them by.

Moving as much by cocaine fuelled intuition as by sight, Tilly ran crouched to the Police cars, razor slashing the newly invented pneumatic valve on the standing wheels, severing them, leaving them to vent the much need air required for them to be driven on. Turning her attention, she slashed and sliced the rear mounted spare tyres in an artisans flourish.

In the space of seconds once more, Moncrief was back in the saddle of her bike, life now kicked back into it. In a cliché cloud of dust, Tilly Moncrief, lady thief, roared back up the hill to the east, and away into the darkness at last. Glancing at her stolen Omega, Tilly smiles in the satisfaction of the professional, four minutes and thirty-nine seconds had passed since she had parked the bike, and now she was away.

Her smile, pure wickedness and delight, the rest of the night was her’s to hide within and enjoy. Champagne, cocaine, and music the prescription.

The war on Cat Lucifer had begun.