Here is the basic run down of the main character in “Flapper”. Shimmy and click on the Flapper above.. 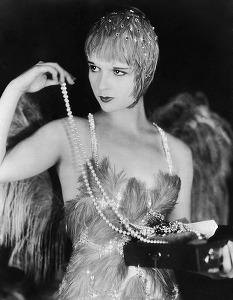 Flappers were a “new breed” of young Western women in the 1920s who wore short skirts, bobbed their hair, listened to jazz, and flaunted their disdain for what was then considered acceptable behavior. Flappers were seen as brash for wearing excessive makeup, drinking, treating sex in a casual manner, smoking, driving automobiles, and otherwise flouting social and sexual norms.[1] Flappers had their origins in the liberal period of the Roaring Twenties, the social, political turbulence and increased transatlantic cultural exchange that followed the end ofWorld War I, as well as the export of American jazz culture to Europe. -> http://en.wikipedia.org/wiki/Flapper

The name was widely popularized after the release of the 1920’s movie The Flapper, but there are a whole lot of differing stories about where the word came from. My favorite story is also one of the more popular tales of the time, it claims the term came from groups of girls walking around in unbuckled galoshes that flapped around as they walked. For a humorous read on Flapper footwear, you may want to read the 1922 article by The New York Times, “Flappers Flaunt Fads in Footwear.” (Source) -> http://www.neatorama.com/2009/06/30/five-fascinating-flapper-facts/

Lots of love and over done pawing,