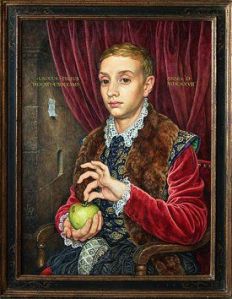 I thought this interesting. Click ‘Boy with Apple’, by Michael Taylor commissioned for the Grand Budapest Hotel after the read. Ben Harper – “Mama’s Got a Girlfriend Now”

5 Ways The Grimms Fairytales Changed After the First Edition

You probably know that the original Brothers Grimm Fairytales didn’t have the same sort of child-friendly happy endings as the Disney versions. But it’s not because Jacob and Wilhelm were a pair of perverts eager to write about child abuse.  When they set out to produce the two-volume first edition of their Kinder- und Hausmarchen (Children’s and Household Tales)—published in 1812 and 1815—the brothers viewed themselves not as authors or even really editors, but as collectors and literary historians.

The original intent of the project was to record and anthologize the oral tradition in German-speaking countries at the start of the 19th century. The Grimms were scholars, working primarily at their desks, who relied on friends and informants and the occasional written document to source the folklore that had been passed down for generations.

Although they added clear transitions where necessary to complete the tales, for the most part the Grimms stayed as true to the original sources as possible.

Last year, Princeton University Press published the first-ever English translation of the first edition of the Grimm Fairytales. In the introduction, translator Jack Zipes writes that “… the more they began gathering tales, the more they became totally devoted to uncovering the ‘natural poetry’—naturpoesie—of the German people, and all their research was geared toward exploring the epics, sagas, and tales that contained what they thought were essential truths about the German cultural heritage. Underlying their work was a pronounced romantic urge to excavate and preserve German cultural contributions made by the common people before the stories became extinct.”

These preservation efforts are seen most clearly in the first edition, with all its lewdness and violence. But once the stories started gaining popularity, the Grimm brothers found it too tempting to alter some of the more unsavory aspects to appeal to a wider audience.

“As soon as they published their first edition, they gradually became fairly famous, and not only in the German-speaking countries—remember, Germany is not united at that point,”Zipes told mental_floss. “Their name and their collection spread like wildfire.”

The effect of this growing renown was two-fold. At the same time as the Grimms were working, a literate middle class was just beginning to emerge in Europe as a result of public school becoming compulsory. With the traditionally oral stories now bound in a text, the literate middle and upper classes took an interest in the tales, but imposed their Victorian Puritan sentiments on some of the rougher aspects.

As Zipes writes in his book’s introduction, “Although they did not abandon their basic notions about the ‘pure’ origins and significance of folk tales when they published the second edition in 1819, there are significant indications that they had been influenced by their critics to make the tales more accessible to a general public and more considerate of children and readers and listeners of the stories.”

This was made possible by the other impact of the first edition’s renown. Although the text was only moderately well-received, people from across Europe began sending the Grimms their own versions of the stories, as they were told in their families. The influx of new material gave the brothers options to compare and intentionally conflate in an effort to get at the essence of the tale, but also as a justification for sanitizing some of the less savory aspects.

We rounded up some of the more surprising aspects of the first edition that were later cleaned up or scrubbed from the text altogether.

1.THEY GOT A LOT LONGER

Through a mix of receiving different, more detailed versions to base their text on and adding their own literary flourishes, the Grimms’ subsequent editions were all much longer than the first. Zipes says that there was “no real cohesion” to the first edition, and this is true particularly of the form and format—while are some fully-realized stories, others read more like ideas or outlines. This reflects the Grimms’ dedicated faithfulness to reprinting only what they heard.

“Wilhelm could not control his desire to make the tales more artistic to appeal to middle-class reading audiences,” Zipes writes in the introduction to the translation. “The result is that the essence of the tales is more vivid in the two volumes of the first edition, for it is here that the Grimms made the greatest effort to respect the voices of the original storytellers or collectors.”

If you grew up watching Disney movies, you learned that stepmothers are all evil witches, jealous of their beautiful stepdaughters—largely because of the remakes of the Grimms’ fairytales. But in the original versions, it was Hansel and Gretel’s own mother who tried to abandon her children in the forest and Snow White’s real mom who not only hired a huntsman to murder the 7-year-old girl but also planned to eat her organs. In an interview with The Guardian, Zipes said “that the Grimms made the change in later editions because they ‘held motherhood sacred,'” but that there were sociological grounds for the change—outside fear of offending potential readers—because “many women died from childbirth in the 18th and 19th centuries, and there were numerous instances in which the father remarried a young woman, perhaps close in age to the father’s eldest daughter,” of whom the new wife might feel jealous.

In the first version of Rapunzel, the evil fairy finds out about the Prince when her naive charge wonders aloud, “Tell me, Mother Gothel, why are my clothes becoming too tight? They don’t fit me any more.” The reader, or listener, is to infer from this that Rapunzel has become impregnated by the Prince during their “merry time” together.

By the 1857 seventh edition, this pregnancy has been cut out of the story entirely and instead, Rapunzel accidentally reveals that she’s been seeing the Prince by asking Mother Gothel why she is so much more difficult to pull up than the he is—foolish and insulting, but at least not sexually active.

4. THE FAIRIES GET RECAST

Zipes describes the supernatural element of the stories as “Kafka-esque.” But while much of the text is altered to be more in line with Christianity, some improbable plot developments remain. “There is a good deal of magic in the tales, and they didn’t really take away the magic too much in the following editions,” he tells mental_floss. “This miraculous transformation that occurs in the tales was generally not deleted.”

That said, the brothers made a particular change to the way they cast these more fantastical elements. In the first edition, the harbingers of magic were almost always fairies—unsurprising in the Fairytale genre. But during the time that the Grimms worked, the Napoleonic wars saw French occupation of much of German-speaking Europe. Somewhere along the line, they decided to stop using the French term “fairy”—or sometimes “faerie”—and instead replace each instance with some other vaguely mystical being. For example, inRapunzal the fairy became a sorceress, and in Briar Rose, better known as Sleeping Beauty, the fairies are changed into wise women.

5. SOME STORIES ARE CUT ALTOGETHER

The first edition of the Grimms’ Fairytales was 156 tales, and the final edition was 210—but they didn’t only add stories in the interim. The deluge of similar tales they received after the first publication drew widespread acclaim gave the brothers plenty of material to work with, but certain tales just couldn’t be sufficiently amended to fit a less gruesome standard. One such story was the aptly-named How Some Children Played At Slaughtering. In it, two children play as a pig and a butcher. As part of the game, the older brother slits his younger brother’s throat, killing him. When their mother finds the scene, she becomes so enraged that she kills the older brother. While she was off doing this, the youngest son drowns in the bath. Now the mother is so despondent that she hangs herself and finally, the father return to find his whole family dead and he, too, dies of heartbreak. Even with a liberal approach to editing, it’s unlikely such a story could be Disney-ified.

Hannah is a staff writer at MentalFloss.com. She studied Ancient History at the University of Pennsylvania and might write your name in hieroglyphics if you ask her nicely. She is an avid fan of baseball and food—although not hotdogs—and wrote about both prior to joining mental_floss. She lives in Brooklyn with two cats —Gatsby and Kilgore Trout— and one boyfriend.

This article came from this groovy spot -> http://mentalfloss.com/article/63113/5-ways-grimms-fairytales-changed-after-first-edition