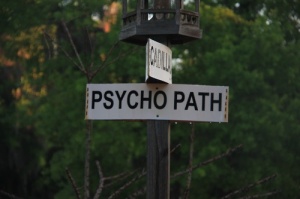 This has nothing to do with writing, I just think it is cool.  Click the the psycho path above, Tone-Loc kicking it old school is the song that featured in Uncle Buck.

Danny DeVito was originally considered for the role of Uncle Buck.

2. CANDY APPEARED IN MORE MOVIES WRITTEN OR DIRECTED BY JOHN HUGHES THAN ANY OTHER ACTOR.

Uncle Buck is only the third theatrically released film starring Macaulay Culkin, who shot to stardom a year later thanks to his role in Home Alone—which, like Uncle Buck, was also written and produced John Hughes. The idea for Home Alone first came to Hughes while Culkin was shooting the scene in Uncle Buck where he interrogates Chanice through the mail slot. (Candy also appears in Home Alone, but he and Culkin don’t have any scenes together.)

4. AMY MADIGAN AND GABY HOFFMANN WERE FAMILY IN A PREVIOUS MOVIE.

Madigan, who plays Chanice, and Hoffmann, who plays Maizy, appeared as mother and daughter in the film Field of Dreams, which was released the same year as Uncle Buck.

5. IT WAS SHOT AND RELEASED IN THE SAME YEAR.

6. THE FILM WAS ORIGINALLY SUPPOSED TO TAKE PLACE IN ST. LOUIS.

It was changed to the Chicago area because unusually warm weather in Missouri that year forced the production to move to a more wintry climate.

7. YOU CAN VISIT THE RUSSELLS’ HOUSE—AND BUCK’S APARTMENT.

The exteriors of the Russells’ house were shot on location at 2602 Lincoln Street in Evanston, Illinois. Buck’s apartment, across the street from Wrigley Field, is located at 3708 N. Sheffield Avenue in Chicago.

8. YOU MIGHT RECOGNIZE THE HIGH SCHOOL FROM OTHER JOHN HUGHES FILMS.

9. IF YOU LOOK CLOSELY, YOU’LL SPOT A FAMILIAR FACE.

The classmate sitting next to Maizy in her school scene is actress Anna Chlumsky, who would later star in My Girl with Macaulay Culkin, and who can be currently seen on HBO’s Veep.

He calls it “The Beast.” Filmmakers used a combination of a gunshot and a firecracker to create its backfiring noise.

Among his more recognizable roles are Frankie from Miller’s Crossing, Frenchy fromGoodfellas, and Mental from Dumb & Dumber.

13. THE FILM SPAWNED A SHORT-LIVED TV SHOW OF THE SAME NAME.

It ran from 1990-1991 and was created without the input of John Hughes or any of the film’s cast. In fact, Hughes didn’t even know the show existed until its producers asked to use exterior footage the director shot for the movie.

14. THERE WAS AN INDIAN UNCLE BUCK REMAKE.

15. YOU CAN MAKE BUCK’S HUGE PANCAKES.

But you’ll need a pretty big mixing bowl. A chef estimated that you’d need 300g of plain flour, 200g of caster sugar, 450ml of milk, 9 medium free range eggs, 100g of melted unsalted butter, and 15g of vegetable oil to make the stack of gigantic pancakes that Buck makes Miles for his birthday.

This is where I found it -> mentalfloss.com/article/59491/15-things-you-probably-didnt-know-about-uncle-buck